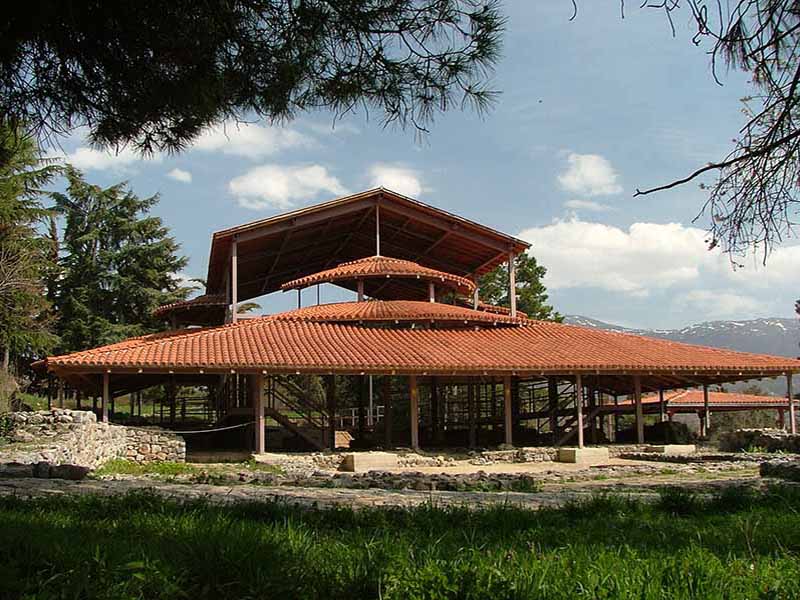 Nine Early Christian churches have been discovered in Ohrid so far, but certainly the most significant and most preserved is the huge basilica at Plaoshnik, which, by its splendour and dimensions is not lagging behind the most magnificent temples of their time erected in Constantinople, Salonika, Antioch and Alexandria.

Systematic archaeological research and excavation of this building began in 1961 under the leadership of the late archaeologist Dr. Vasil Lahtov. This work continued professor at Skopje University Dimche Koco.

This early Christian basilica was probably built in the late 4th or early 5th century and has huge dimensions, almost as a football field. This one, like most churches at that time, was a three-nave building, which central part had a rectangular shape, while at the sides it had semicircle finishing and was covered by a monumental vault, and had a separate space for baptism. The basilica was built from large square smoothed tight white and reddish stone blocks, heavy a few hundred kilos. It is not excluded that some of the material for construction is transferred from the ruins of the ancient theatre that was located in that part of the town and the remains of which seats were found near the Basilica.

The preserved floor mosaic in this huge and lavish Episcopal Church, besides the varied geometric and floral ornaments, has numerous depictions of animals, especially birds. In numerous circular emblems on the mosaic floor there are depictions of various species of birds shown in various poses, some stationary, some in easy movement, some peck grapes, others peck seeds on the ground, while some are shown in flight. Representations of birds on these mosaics and animals in general, in addition to decorative character and undoubtedly symbolic significance for the Christian liturgy is very important from another aspect, and that is the presence of certain venison species. Namely, among the very realistically depicted birds, we clearly recognize pheasants, pigeons, partridges, quails, wild geese, ducks and various other waders. All these are species that have always inhabited these areas, and most of them live here still today. Animals presented on these mosaics are domestic (donkey, cow, lamb), but there are also deer, chamois, ibexes, deer, rabbits. Some of them are represented standing, some lying, others jumping. Interesting and quite naturalistic are the representations of two rabbits in the nave, one eating handfuls of grapes, the other eats carrot or beet.

In this huge complex there are about hundred of square meters of mosaic are preserved that confirm the mastery of the great and unknown artists.

In the north-eastern annex to this basilica there are representations of deer while in the northern and southern apse of the Baptistery there are animals that mostly resemble to ibexes. Both are depicted very realistically at the moment when approaching to drink water. Also notable are the representations of peacocks in the north-eastern part of the nave and the narthex, where we meet a fish by the west wall, particularly characteristic Christian motif, but also significant for Ohrid and the lake.

The presentations of peacock merge the symbols of immortality, eternity, Christ's body and blood, since he in winter loses its feathers, and in early spring gets new. It is the body of the believer who discarded feathers of the mortality replaces with feathers of immortality, so the peacock became a symbol of the resurrection of the body, analogous to the general recovery of nature in spring.

Most impressive in this basilica is the baptistery font with triconhal shape and outstanding mosaics with anthropomorphic representation of the four rivers of paradise: Gihon, Pison, Tigris and Euphrates.

Its iconographic interpretation is the only example in the Early Christian art.

The four rivers of paradise, Gihon, Pison, Tigris and Euphrates are presented as human heads from whose mouths water springs. These are also the only personal representations on the floor mosaics from the early Christian period in Macedonia, and we find analogies only in Salonika, the Croatian coast and Sicily.

The donors and benefactors marked this great gift with an inscription in eastern part of the room (north of the main church) without their names, in a very modest way: "This was done for their blessing, by those whose names are known only to God."

This basilica reveals that in the early Christian Lychnidos not only the art of the highest quality was cherished, but also that there were churches that possessed the greatest treasure known in this period, which confirms the fact that Lychnidos was a very important religious, cultural and economic centre.

At the same time, the presence of such wealth can be interpreted by the fact that here it was the seat of the Lychnidian bishops.

It is thought that this very beautiful building suffered and was destroyed in the earthquake in the 6th century (518) when ancient Skupi (present day Skopje) was destroyed, according the information by the Byzantine chronicler Procopius. There are indications that this wreck shortly after their arrival on the Balkans, was used members of the Slavic tribes for living, because on the mosaic floors of the church remains of fireplaces have been founds that are believed to have belonged to the Slavs. If this is true, this would be considered the invention of the first traces of the Slavs in Ohrid.

At the place of the basilica, there are also found remains of later church buildings, according to the numerous fragments of frescoes, traces of walls and foundations of many tombs and other ceramics and other objects. This indicates that it is not a coincidence that just at this place St. Clement of Ohrid built his monastery St. Panteleimon, one of the most important centres of the old Slavic literacy and culture.