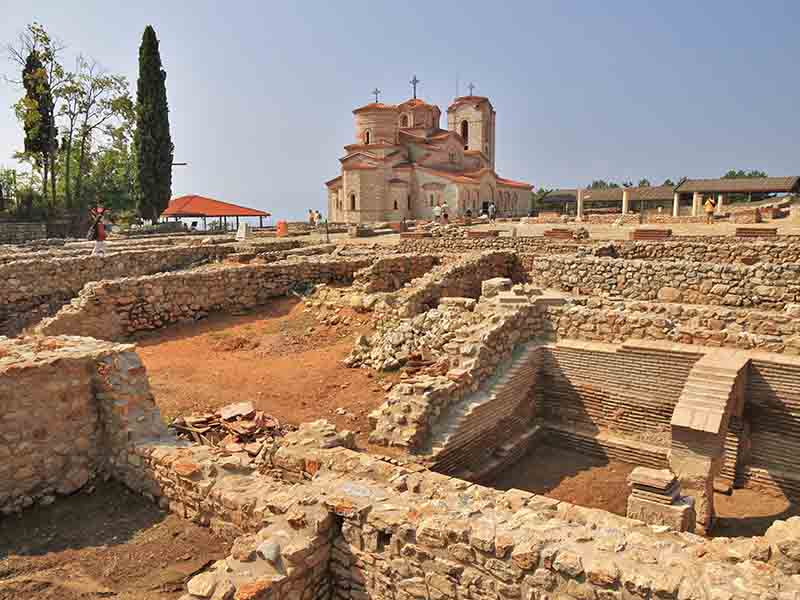 The site Plaoshnik is located in the southern foot of the higher (western) hill of Ohrid, on a flattened plateau between the citadel of Samuel's fortress and church of St. John Theologian at Kaneo on the coast of Lake Ohrid. Plaoshnik is exceptional archaeological complex with cultural layers from prehistory, antiquity and the Middle Ages.

The first archaeological interventions Plaoshnik occurred in the period from October 1942 to May 1943 (with interruptions), at the space inside the remains of Sultan Mehmed mosque, organized by the Department of Antiquities in Ohrid headed by its manager Kiril Prlichev and then and Dimche Koco. Thus they discovered the remains of the old St. Clement's church and the tomb of St. Clement of Ohrid. The overall results of these excavations were published by the professor Dimche Koco in 1948. At the time from 1960-1964-1966 of the archaeological excavations on Imaret (Plaoshnik) have been performed again, while simultaneously revealing the polyconchl Early Christian church from the 5th-6th century, and in August-September 1965 the State Institute for Protection of Monuments of Culture-Skopje performs archaeological and conservation research in the area of St. Clement's church "St. Panteleimon" after which conservation work wereperformed.

Major operations were carried out at the time of 1999-2002 when revisional archaeological excavations were performed inside the St. Clement's church and around it with fully disclosed and defined building stages and a monumental three-aisled early Christian basilica with narthex, atrium, baptistery, auxiliary premises and wide yards in the eastern part of the complex was fully discovered.

Many marble columns with bases and capitals were discovered in the spacious atrium on the north side of the building, and the narthex and the northern aisle of the Basilica have preserved mosaic floors in several stages. However, the most representative of this basilica is certainly its monumental baptistery located south of its apse with an extraordinary preserved mosaic floor.

It has a rectangular shape in the middle of which is a circular pscine (pool where the baptism was performed) with a staircase on the east side that went down into the pool. Mosaic decoration of its floor consists of geometric ornaments and symbolic floral and zoomorphic images. There are stylized depictions of vines with grapes, leaves, flowers and pretty realistic represented domestic and wild animals and birds such as lamb, lion, peacock, cock, marsh birds. In the circular fields on the frieze on the floor, formed by two intertwined ribbons, among other presentations, there are also various forms of crosses among them and the swastika.

All activities at the site were undertaken within the project "Restoration of St. Clement's Church St. Panteleimon at Plaoshnik in Ohrid on the occasion of the anniversary "2000 years of Christianity in Macedonia and the world", proposed and implemented by the competent institution, NI Institute for Protection of Monuments of Culture and Museum-Ohrid, supported and funded by the Government of the Republic of Macedonia, the Macedonian Orthodox Church and the entire Macedonian nation.

The restoration was carried out on the foundations of the old St. Clement's church and the foundation of its extensions, and after prior removal of the remains of Sultan Mehmed mosque in which interior were still the remnants of the church and the tomb of St. Cleiment of Ohrid. At the base parts of the Islamic sacred object are shown as a testimony to its existence and testimony to a historical time in this area. Parallely, a protective roof structure over the polyconchal Early Christian church was built and conservation of the mosaic floor surfaces of the baptistery of the same sacral building was carried out. All activities of the project were completed with a large People's Council and the liturgical procession for the transfer of the relics of St. Clement of Ohrid from the second cathedral church in Ohrid, Holy Virgin Peribleptos at Deboj, to the old church of St. Clement, St. Panteleimon and to the tomb of St. Clement at Plaoshnik, as well as the consecration of the restored church on August 11, 2002.

The archaeological research, conservation and restoration work continued to a lesser extent in the time between 2003 and 2006, during which some areas west of the narthex of the monumental three-aisled basilica and the spaces under the mosaic floors of the narthex and baptistery of the same early Christian building were explored. During this time the conservation works on the mosaic floor of the baptistery we were fully completed by placing them on new substrates.

The latest systematic archaeological excavations were carried out from March to December 2007 and in 2008 began the realization of the second phase of the project "Plaoshnik" i.e. the restoration of St. Clement's University at Plaoshnik in Ohrid.