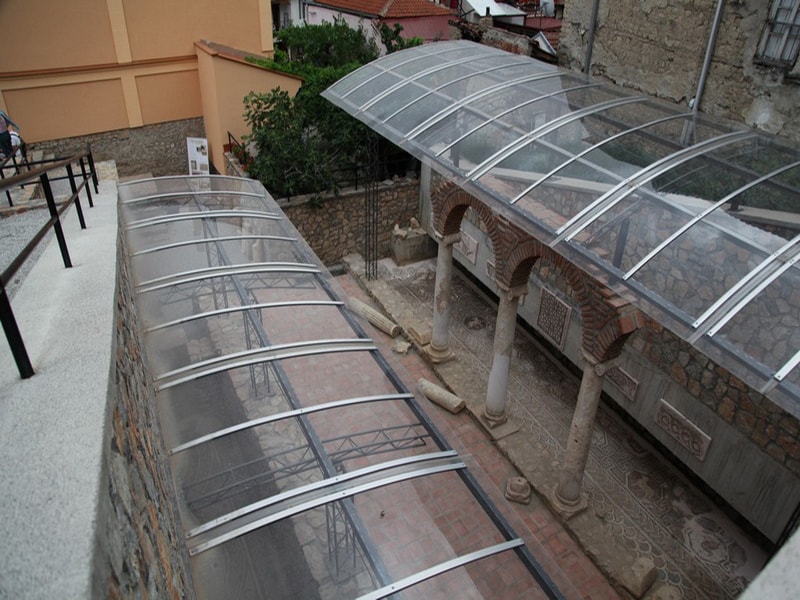 The site "Manchevci" was partially explored during 2007 when two objects were removed. After the archaeological excavations at this archaeological site in the old urban core of Ohrid, an Early Christian basilica was discovered , more precisely parts of northern and central nave when about 200 m2 were explored. The site is located near the Cathedral of St. Sophia, on the direction to the ancient theater, in a densely populated part of the old city and probably extends under the surrounding houses.

The basilica, which is one of the nine basilicas in the city and originates from the 4th-5th century BC, has a pretty preserved floor mosaic with a decorative arrangement that was characteristic for the 4th and 5th century. Particularly significant stands the mosaics field with a donor's inscription that mentions Thomas and John, who probably built the facility. There were also discovered fragments of frescoes in the lower sections of the walls. During the archaeological excavations very significant elements and fragments of the marble architectonic and decorative sculpture were revealed.

The project for conservation and presentation of the discovered structures of the basilica at the site have continued several years in row, and the realization of the planned activities were conducted by NI Institute for Protection of Monuments of Culture and Museum-Ohrid. In the period from 2011 to 2013 protection from land sliding of the ground profiles with construction of retaining walls and their cladding with stone was made.

The maximum restoration interventions were performed within the design solutions, by performing anastylosis of the columns and partial reconstruction of some elements of the carrying construction for which we had reliable data. Authentic materials, taking into account the opus of the masonry were used for the conservation.

Simultaneously the preserved structures of the basilica were consolidated, and for protection of the building from rainwater eaves with lightweight construction and covered with transparent acrylic sheets were built.