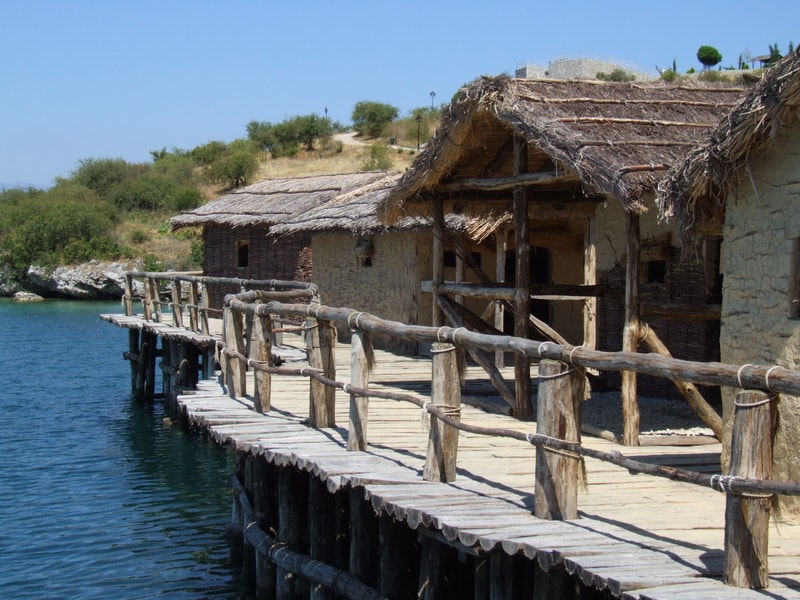 The pile-dwelling surface habitats as a means of human existence in specific microenvironment, are characteristic especially for Prehistory, from the Neolithic-Early Stone Age, Eneolithic-Copper Age, Bronze Age and Iron Age.

In 1977 the first underwater archaeological research in Macedonia were carried out at the site Plocha Michov Grad, in the Bay of Bones, along the south coast of the Gradihste peninsula, near the village Peshtani.

At a depth of three to five meters numerous wooden piles stuck in the lake bottom were discovered, as well as numerous artifacts dated to the late Bronze and early Iron Age, i.e. from 1200 BC to 700 AD. It is assumed that this and other similar habitats on Ohrid Lake belong to the time when the first tribal populations began their profilation, respectively, at the time of the existence of theBryges, the oldest tribal community of this region, which is actually an integral element of the ancient Macedonian ethnic substrate.

Researchers at the bottom of the lake recorded 6.000 wooden pile,s in research campaigns conducted periodically from 1997 to 2005.

Based on measurements of the surface area of the settlement it was concluded that it had spread over an area of approximately 8500 m2. The remains of the settlement were discovered on some ten meters from the shore of the Bay of Bones, on the southern coast of the Gradihte peninsula in length of 155 meters (east-west) and 55 meters (north-south).

It was built on a platform supported by wooden piles stuck in the bottom of the lake, and a wooden bridge connected the settlement with the mainland. The studies have shown that on the bottom of the lake in the area of this settlement there is a remarkably concentration of whole and particularly fragmented ceramic vessels, stone artifacts and fragmented animal bones.

Among the movable archaeological material are the circular ceramic tiles with different diameter with two, three, or four circular openings. It is assumed that these items were used as fishing equipment by the inhabitants of the settlement. Among the ceramic objects there are also different forms of vertebra, conical and bi-conical, as well as objects used in rituals-altars. The stone tools are mainly fragments of hand grinders for wheat, as well as whole, smoothed elliptical stone objects which must have served as tools for washing clothes. Among the many fragments of bones of domestic animals, there are fragments of deer antlers, presumably used as tools.

Within the museum complex, on the flattened plateau there is a fortress-Roman castle from the 3rd century AD enabling you to consider another timeof the Macedonian history and archaeology.

The complex contains a facility with a permanent exhibition of artifacts and a coffee bar, a base for underwater archeology and development of underwater tourism, pile-dwelling settlement with 24 reconstructed prehistoric huts on a wooden platform over the lake, several reconstructed half-open constructions within the castle (in the form of viеwpoints for rest of the visitors) and other contents that enrich the overall environment of the waters and shores of Ohrid Lake.