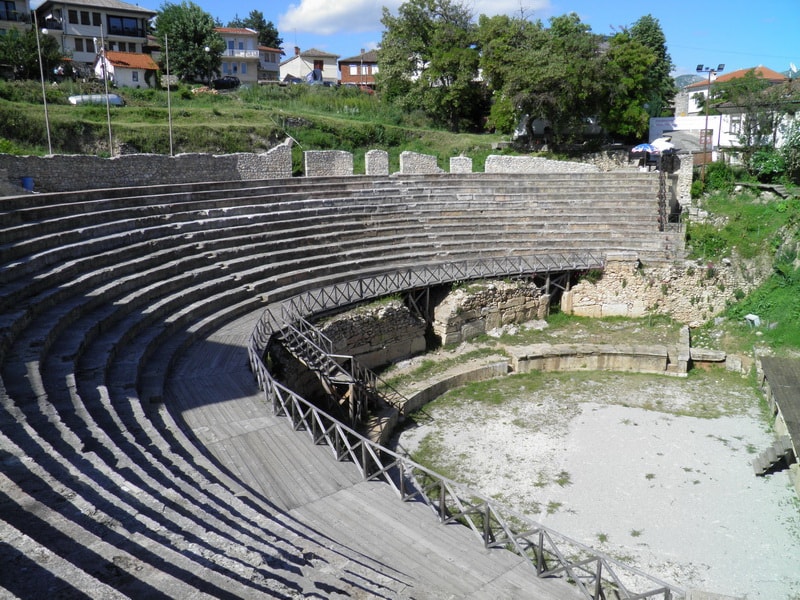 Antique Theater is located at the foot of the eastern slope of the higher Ohrid hill, under Samuel's Fortress, near one of the main entrances to the fortified city-the Upper Gate, from where one captures the unforgettable view of the lake and the mountains that surround it.

It was built more than two millennia, sometime at the end of 3rd or the beginning of 2nd century during the late Hellenism and was intended for plays, musical and poetry performances for the lovers of theater art.

It was built the according to the look of the famous Greek stone buildings of this kind, with rich architectural decoration, especially on the theater building which was decorated with a frieze of bas-relief tablets with carved scenes from the life of the gods. Two such marble slabs, which are today kept in the Ohrid Museum, present the god Dionysus in the company of the Muses.

Some of the contemporary urban notables had prepaid their own seats in the theater and so today we learn about Crispus and Topos as big fans of the theater art because their names still stand carved in stone blocks of the seats. Immediately after the Roman conquest of this region in 148 BC, the theater, probably in a remarkably short time, was adapted to the needs of the Roman way of life. The building was transformed into a theater space with arena for gladiatorial fights and fights with wild beasts for which few of the lower rows of seats were demolished and in their place were built several cages for animals, and the orchestra and honorary seats were surrounded by a protective wall. Later in the upper, outer zone was built epiteatron and the capacity of the theater rose to 5.000 spectators.

It is thought that with the euphoria that occurred at the beginning of the 4th century AD, when St. Erasmus from Antioch, the first Christian missionary arrived in Ohrid, converted to Christianity 25,000 people, all pagan buildings in the city were destroyed. Most probably in these demolitions suffered and the theater, while the material of its seats and other objects later was used for building early Christian basilicas and many other sacred and profane objects.

The first assumptions that in ancient Lychnidos (today Ohrid) existed theater, gave Russian art historian Nikodim P. Kondakov at the beginning of 20th century, and already in 1935, when the first archaeological excavations have been performed, those assumptions were confirmed and the theater was partly uncovered. Later, during the excavations carried out in the period 1959-1960, was determined the exact location and size of the theater.

The systematic excavations, started in 1977 and after a lapse of six years continued in 1984, discovered the locations of the entrances and the theater building, the orchestra with the honorary seats and the arena and nine rows of seats were uncovered.

During 1999, the project for its full uncovering and revitalization and since 2001, after twenty centuries, theatrical, musical performances and various other events are performed on the stage of the reconstructed open space of the ancient theater.